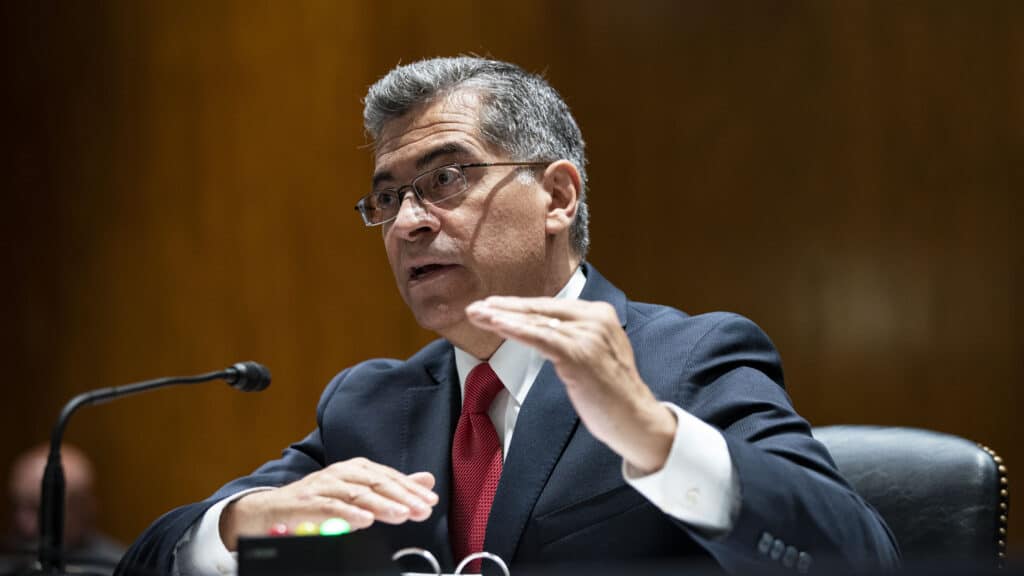 WASHINGTON — Department of Health and Human Services Secretary Xavier Becerra on Monday took the highly unusual step of ordering Medicare to reconsider a historic hike in premiums after Biogen slashed the price for its controversial Alzheimer’s drug in half.

“With the 50% price drop of Aduhelm on January 1, there is a compelling basis for CMS to reexamine the previous recommendation,” Becerra said in a written statement.

It is highly unusual for Medicare to make changes to premiums after a plan year has begun, multiple Medicare policy experts said. Normally, if Medicare has extra premium funds, officials factor that into the next year’s premium calculations.

The premium dilemma illustrates how problematic high-priced drugs can be for the Medicare program, as the pricing decisions of a single company are causing unprecedented upheaval in the process to set monthly payments for the more than 60 million seniors enrolled in the program.

Medicare in November announced the program’s largest-ever premium increase for 2021, citing a uncertainty around the cost of Aduhelm, a new therapy for Alzheimer’s that has stoked controversy because of its questionable clinical benefit, high price, and potentially serious side effects.

Biogen cut the price of Aduhelm from $56,000 per year to $28,200 in December after dismal uptake of the drug. A number of prominent academic medical centers have refused to administer the drug.

Aduhelm is administered in physicians’ offices, which means it falls under a part of the Medicare program that is funded in part by premium payments from seniors, and in part from taxpayer revenue. Medicare covers more expensive drugs than Aduhelm, but it has a much broader potential patient population than a specialty cancer drug, for example.

“The price is so high, and the potential demand would be so great, that the increase in premiums is much higher than it would have been otherwise in the absence of an Aduhelm,” Cubanski said.

Democrats in Congress have pressed Becerra to pressure Medicare to reconsider its premium decision as the midterm elections loom later this year and President Biden’s massive domestic spending package that would lower some health care costs has stalled.

“Medicare beneficiaries cannot afford to be saddled with a record increase in monthly premium costs — especially when those premium costs are being driven up by uncertain expectations of sky high Medicare costs for an outrageously expensive drug like Aduhelm that has presented limited clinical evidence of its effectiveness,” Sen. Ron Wyden (D-Ore.) wrote to Becerra on Dec. 13.

Sens. Maggie Hassan (D-N.H.) and Mark Kelly (D-Ariz.), who are running competitive reelection races this fall that may determine whether Democrats keep control of the Senate, wrote their own letter to Biden in December asking for the premiums to be lowered.

Medicare officials set premiums using a complex set of formulas to predict uncertainty, and the change in Aduhelm’s price changes a significant variable in that calculation.

“It would only benefit seniors to have lower premiums, and it would be foolish not to take advantage of seeing those benefits for seniors across America,” said Cristina Boccuti, director of health policy at West Health Policy Center.

Another major variable is which patients will be eligible to receive Aduhelm, which is still unknown. Medicare is scheduled to release a draft coverage decision that could make or break the drug’s future by Wednesday. Officials are not supposed to consider a drug’s cost in deciding whether to cover it for Medicare beneficiaries.

The final coverage decision, which is scheduled to be released by April 12, could cause significant changes in how much Aduhelm could cost the Medicare program, depending on how much patient access is restricted by diagnostic test results, which physicians could prescribe the drug, or other limitations.

“This just highlights the effect that one drug can possibly have on total health spending,” said Cori Uccello, a senior health fellow at the American Academy of Actuaries.