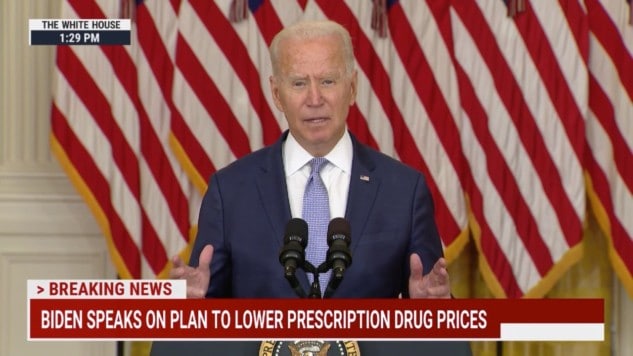 President Biden made a forceful appeal to Congress Thursday on two of the most crucial issues facing American seniors:  prescription drug pricing and Medicare expansion.  He urged lawmakers to allow Medicare to negotiate prices with Big Pharma – something we and other seniors’ groups have long advocated – as part of a package of prescription drug pricing reforms.  The President then called on Congress to use those cost savings (estimated at more than $300 billion over ten years) to widen Medicare benefits to include dental, vision, and hearing coverage.

“For years, the price of many prescription drugs has dramatically outpaced inflation.  These prices have put the squeeze on too many families…  They’ve been forced into terrible choices, between maintaining their health, paying the rent or the mortgage, putting food on the table. And that’s the case for a lot of working families and seniors.” – President Biden, 8/12/21

This is the first time a President has used the ‘bully pulpit’ in such a specific way to deliver seniors relief from prescription price gouging – and to expand Medicare to include these additional coverages.  Interestingly enough, the term ‘bully pulpit’ originated with President Theodore Roosevelt. In reading-over his upcoming Presidential message to Congress, Roosevelt said, “I suppose my critics will call (it) preaching, but I’ve got such a bully pulpit!”  Today, President Biden knows he cannot force Congress to adopt his proposals, but he can put the moral authority of the White House behind the effort.

“Right now, when Americans overpay for prescription drugs, too many pharmaceutical companies don’t use the profit nearly enough to innovate or research. Too many companies use it on buying back their stock, inflate their worth, drive up CEO’s salaries and compensation, and find ways to box out the competition.” – President Biden, 8/12/21

Kaiser Health News reports that drug pricing legislation introduced in the 116th Congress would have reduced spending by $117 billion for Medicare Part D beneficiaries from 2020 to 2029. That includes a reduction of $102.6 billion in cost sharing for patients who use Part D-covered drugs.  This represents significant potential savings for older Americans, many of whom are living on fixed incomes and simply can’t afford current drug prices. What have they done instead? Many seniors are rationing medications or not filling prescriptions altogether — or, as President Biden pointed out, having to make painful choices between paying for things like food, housing, or medicine.

Something similar is happening with enrollees in Medicare Part B, which does not currently cover basic dental, vision, or hearing care. Kaiser Family Foundation reports:

“Almost half of all Medicare beneficiaries did not have a dental visit within the past year (47%), with higher rates among those who are Black (68%) or Hispanic (61%), have low incomes (73%), or who are in fair or poor health (63%)…” – Kaiser Family Foundation

There is equally disturbing data about seniors forgoing proper hearing and vision care, too, because of a lack of Medicare coverage — even though that type of care is the gateway to good health.  Neglecting dental, vision, and hearing care can lead to serious and life-threatening conditions, which is why it’s appropriate for President Biden to wield the moral authority of the his office on this issue.

Lawmakers have introduced numerous bills – in the current Congress and in previous sessions – to rein-in prescription drug prices and expand Medicare benefits.  But GOP leader Mitch McConnell obstructed those bills in the Senate.  Now that the Democrats have control of the White House, Senate, and House – albeit by thin margins – these bills are being incorporated into a single package.  Democratic leadership plans to enact key facets of these proposals – including the President’s own – on a party-line vote through the budget reconciliation process.  The Senate this week passed a budget blueprint, including President Biden’s entire $3.5 trillion dollar spending package, laying the foundation for Medicare price negotiation and dental, vision, and hearing benefits.

The ball is now in the House’s court to approve the budget blueprint, and initiate a reconciliation process to be hashed out in the fall. House Democrats already are divided on some parts of this agenda, including the price tag.  President Biden can help assure that the most crucial provisions for seniors remain intact by continuing to apply pressure on Congress, and to keep using that bully pulpit until the job is done.