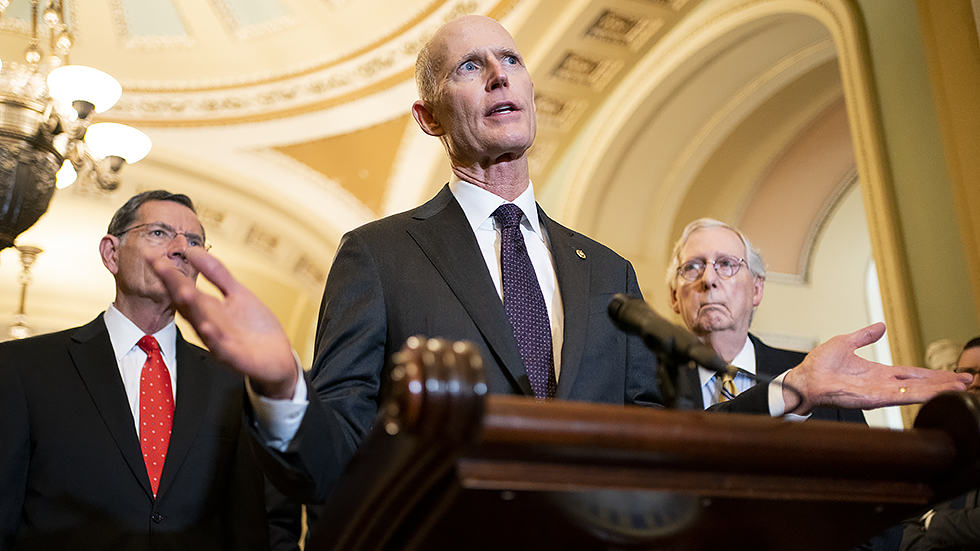 Sixty-five percent of respondents said they would be less likely to support the GOP “If Senate Republicans have a new plan that would end Medicare, Medicaid and Social Security in five years,” according to the poll, which was conducted by Blue Rose Research.

The survey also found that 55 percent of voters said they would be less likely to support the party “If Senate Republicans have a new plan that would end the coverage protections for pre-existing conditions from the Affordable Care Act in five years.”

The findings come as Senate Democrats launch an onslaught of attacks on their GOP colleagues, pointing to Sen. Rick Scott’s (Fla.) GOP platform proposal that his office independently released in February.

While Senate Republicans have not released their official agenda, Scott, who also chairs the National Republican Senatorial Campaign Committee, released one in his own capacity.

In the plan, Scott calls for all federal legislation to sunset within a period of five years. Such an action would allow the possibility for those programs to end if Congress did not approve them.

“We will not have as part of our agenda a bill that raises taxes on half the American people and sunsets Social Security and Medicare within five years,” McConnell said.

On the issue of taxes, the poll found that 60 percent of voters said they would be less likely to support the GOP “if Senate Republicans have a new plan that would raise taxes on over half of all Americans, including seniors and working families.”

The Florida senator released a statement explaining his reasoning on the tax portion of his plan.

“I went out and made a statement that got me in trouble. I said that all Americans need to have some skin in the game. Even if it is just a few bucks, everyone needs to know what it is like to pay some taxes. It hit a nerve.”

The DSCC poll was conducted by Blue Rose Research from March 25-30. Responses were collected from 2,777 people in Arizona, Georgia, Nevada, New Hampshire, Pennsylvania and Wisconsin.