Joe Biden Says He Stands With Unions. This Is His Moment to Prove It. – The longest national nurses strike in over a decade could also be a “watershed moment” for Medicare for All. 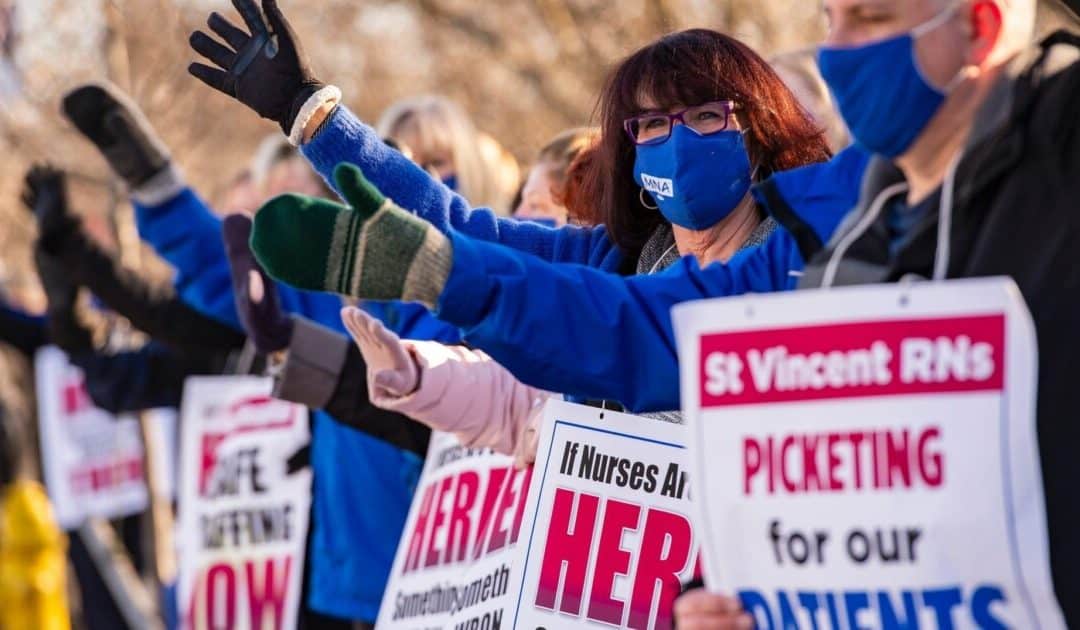 Speaking on the recent National Solidarity Call in support of striking nurses at St. Vincent’s Hospital in Worcester, Massachusetts, Our Revolution leader Joseph Geevarghese characterized the situation as “Biden’s PATCO Moment.” The call was convened by the Labor Campaign for Single Payer to help mobilize national support for the 800 nurses at the Tenet Healthcare-owned hospital who are now engaged in the longest nurses strike nationally in over a decade. Tenet has spent more than $75 million to date to prolong the strike. A fraction of those funds could have easily met the nurses demands for the staffing improvements that are the sole issue driving the strike.

Now Tenet is threatening to permanently replace the striking nurses who are represented by the Massachusetts Nurses Association (MNA). This action, by a notorious healthcare profiteer (Tenet leveraged federal bailout funds intended to provide urgent relief to employees and patients to triple its profits at the height of the pandemic last summer), has transformed a hard fought strike battle into a red line issue for the entire labor movement.

For those of us old enough to remember, it evokes the rampage of union busting that followed the Reagan Administration’s mass firing of striking air traffic controllers in the notorious PATCO strike of 1981.

Busting the air traffic controllers’ union sent a signal to employers everywhere that it was acceptable for management to break strikes and bust unions. In quick order, striking workers from copper miners in Arizona to newspaper workers in Detroit found themselves permanently replaced. Even more significantly, it changed the balance of power in labor/management relations as labor’s most powerful weapon was neutralized. This ushered in a devastating period of concessionary bargaining whose consequences are still being felt today.

Reagan’s decision to fire the striking PATCO members was not some isolated act of pique by an outraged president. In fact, his administration jumped at the opportunity to give teeth to its explicit policy to weaken and undermine the considerable power of the U.S. labor movement. And it was very successful.

The U.S. labor movement was slow to respond to this provocation. Both of us can remember standing on the National Mall on Solidarity Day in 1981 with half a million other union workers. It had taken the AFL-CIO more than six weeks after the initial firings to call the rally and they chose to hold it on a Saturday when Washington was shut down tight for the weekend. As we dozed in the sun listening to endless speeches, we could see the planes taking off and landing unimpeded just across the Potomac at National Airport. What should have been a forceful exhibition of labor power had been turned into a demonstration of our impotence. Like many others who were there that day, we vowed to never let another PATCO moment go unchallenged.

Tenet is a key player in a major strategic sector of the economy. If it is able to make the threat of permanent replacement an acceptable management tool in healthcare bargaining, it will weaken the entire labor movement for decades to come.

That’s why the Labor Campaign for Single Payer and other labor groups are stepping up to support the nurses and their union. They will be joining the MNA at a rally on July 7 in front of Tenet Headquarters in Dallas. They are also circulating a petition urging members of Congress to join Reps. Katie Porter (D—Calif.) and Rosa DeLaura (D—Conn.) in requesting an investigation into the use of taxpayer-financed Covid-19 relief funds by Tenet and other large hospital systems.

This strike could be a watershed moment for the Medicare for All movement by exposing the corrupt and anti-worker underpinnings of our for-profit healthcare system. “The simple fact is that, if we had Medicare for All, we wouldn’t even be in this fight,” said LCSP National Coordinator Rhiannon Duryea. “Nurse-to-patient ratios would be set by law, ensuring safe and effective staffing ratios across the country that protect nurses, patients, and the community. Hospitals would not be able to exploit nurses and patients to line shareholder pockets.”

This strike could also be a watershed moment for the Biden administration. Ronald Reagan reversed a 40-year policy to promote the right of workers to organize and to bargain collectively. Before Reagan, corporations feared using the permanent replacement option because the federal government had made it clear that it would not tolerate such brutal behavior in the course of labor relations. After Reagan, it was open season on workers and their unions. Inequality skyrocketed as wealth was massively redistributed upward.

President Biden, to his credit, has vowed to reverse these trends. He has made a number of statements explicitly supporting worker rights and has appointed a number of pro-union advocates to key policy positions.

This is his chance to send a message to Tenet and corporate America that there’s a new sheriff in town. We need to challenge the Biden administration to put its money where its mouth is and to intervene forcefully in this conflict. The president must make it clear that permanently replacing lawful strikers is contrary to the policy of the U.S. government.

Tenet is not alone in trying to pull the rug out from under an upsurge in labor militancy. There are a number of current and pending labor battles where management is engaging in overt union busting, including months-long strikes by coal miners in Alabama and steelworkers employed by Allegheny Industries as well as a nasty lockout of refinery workers at a giant Exxon/Mobil facility in Beaumont, Texas.

You can be sure that employers everywhere are watching how the Biden Administration reacts to these crises. As Our Revolution’s Geevarghese told the participants on the Solidarity Call, “This strike creates the opportunity for President Biden to undo what President Reagan did.” It’s an opportunity that should not be squandered.

This story was first posted at Common Dreams.