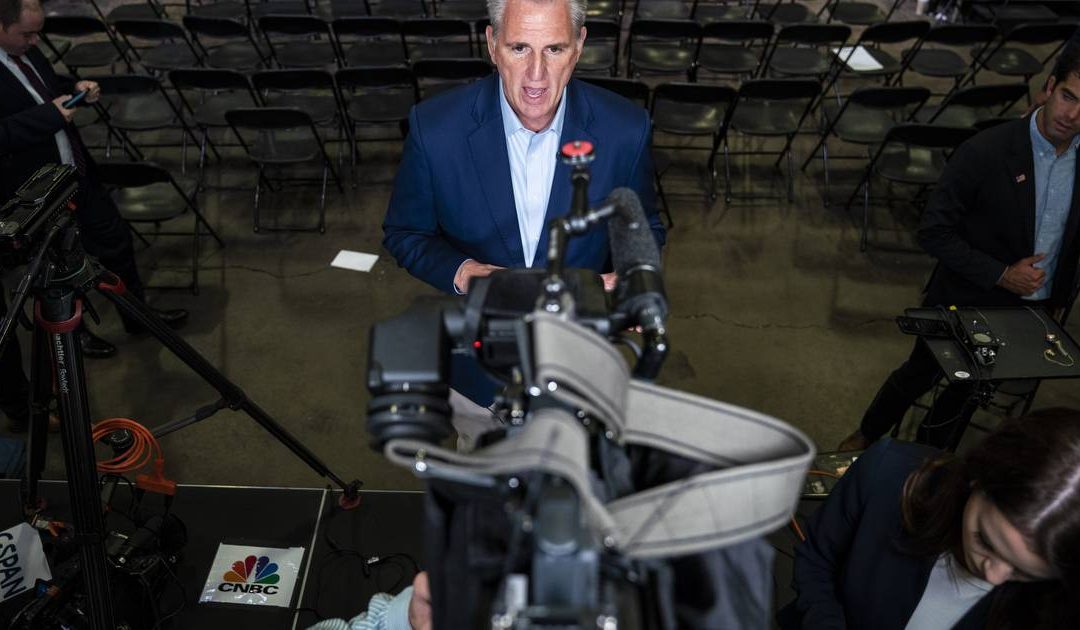 WASHINGTON – House Minority Leader Kevin McCarthy (R-Calif.) said that if Republicans win control of the House that the GOP will use raising the debt limit as leverage to force spending cuts – which could include cuts to Medicare and Social Security – and limit additional funding to Ukraine.

“You can’t just continue down the path to keep spending and adding to the debt,” the California Republican told Punchbowl News in a recent interview. “And if people want to make a debt ceiling [for a longer period of time], just like anything else, there comes a point in time where, okay, we’ll provide you more money, but you got to change your current behavior.”

“We’re not just going to keep lifting your credit card limit, right,” he added. “And we should seriously sit together and [figure out] where can we eliminate some waste? Where can we make the economy grow stronger?”

Pressed on whether changes to the entitlement programs such as Medicare and Social Security were part of the debt ceiling discussions, McCarthy said he would not “predetermine” anything.

The debt limit – the country’s borrowing cap – will need to be lifted next year to protect the country’s credit score and to prevent the United States from defaulting on its debt. But McCarthy suggested that his party would be willing to hold the debt limit up for policy changes.

The debt limit is the total amount of money that the government is authorized to borrow to meet its existing legal obligations, including Social Security and Medicare benefits, military salaries, interest on the national debt, tax refunds, and other payments. The debt limit is not new spending but rather allows the government to finance existing legal obligations.

Congress raised the debt ceiling three times when Donald Trump was president, avoiding the market-rattling, economic showdowns that congressional Republicans had forced when Democratic President Barack Obama was in office. During the Trump presidency, and for a time when Republicans controlled at least one chamber of Congress, the debt soared to $7 trillion.

McCarthy is not the first Republican to say he is open to changes in the entitlement programs. Sen. Ron Johnson (R-Wis.) has suggested that Social Security and Medicare be eliminated as federal entitlement programs, and that they should instead become programs approved by Congress on an annual basis as discretionary spending.

Those who work in the United States pay Social Security and Medicare taxes that go into federal trust funds. Upon retirement, based on a person’s lifetime earnings and other factors, a retiree is eligible to receive monthly Social Security payments. Similarly, Medicare is the federal health insurance program that kicks in for people 65 and older, or for others who have disabilities.

In an interview in August, Johnson, who is seeking a third term in the Senate, lamented that the Social Security and Medicare programs automatically grant benefits to those who meet the qualifications – that is, to those who had been paying into the system over their working life.

“If you qualify for the entitlement, you just get it no matter what the cost,” Johnson said. “And our problem in this country is that more than 70 percent of our federal budget, of our federal spending, is all mandatory spending. It’s on automatic pilot. It never – you just don’t do proper oversight. You don’t get in there and fix the programs going bankrupt. It’s just on automatic pilot.”

Sen. Rick Scott (R-Fla.) has proposed to “sunset” all federal programs after five years, meaning they would expire unless renewed. “If a law is worth keeping, Congress can pass it again,” Scott says in his proposal.

Concerns about government spending are a frequent Republican talking point when Democrats control the White House. Prior to McCarthy accusing congressional Democrats and President Biden of spending too much money, former House speaker John A. Boehner (R-Ohio) complained about spending during the Obama presidency.

McCarthy also signaled that additional aid to Ukraine, now in the ninth month of war with Russia, is unlikely if Republicans have a House majority. To date, Congress has provided more than $60 billion to the Eastern European country fighting off an invasion from Russia, with strong bipartisan votes.

McCarthy suggested maintaining that support could be difficult.

“I think people are gonna be sitting in a recession, and they’re not going to write a blank check to Ukraine,” McCarthy said. “They just won’t do it.”

“There’s the things [the Biden administration] is not doing domestically,” McCarthy said. “Not doing the border and people begin to weigh that. Ukraine is important, but at the same time it can’t be the only thing they do, and it can’t be a blank check.”

The Washington Post’s Amy B Wang contributed to this report.