NEW LOW: Republicans claw past the bottom in push to gut Social Security and Medicare 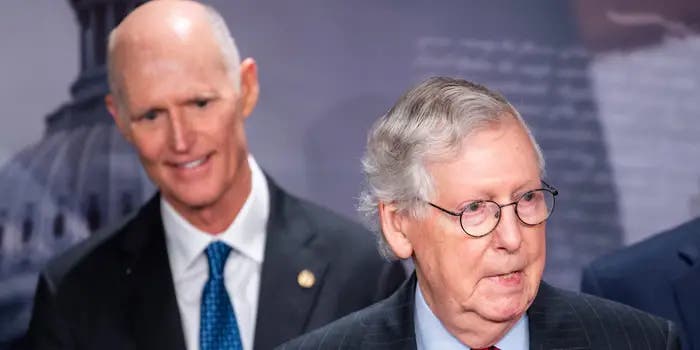 Much is on the ballot in November. With issues ranging from reproductive healthcare rights to same-sex marriage, perhaps one of the most crucial and overlooked goals  — and potentially disastrous consequences —of a Republican-controlled House is the GOP’s plan to gut social security.

Bloomberg Government released a damning report describing the Republican game plan if they manage to assume the congressional majority. Using the debt ceiling as leverage, House Republicans would most likely demand concessions to avoid a government shutdown and prevent the United States default on payment obligations.

“Social Security and Medicare eligibility changes, spending caps, and safety-net work requirements are among the top priorities for key House Republicans who want to use next year’s debt-limit deadline to extract concessions from Democrats,” the report stated.

“The debt limit is clearly one of those tools that Republicans — that a Republican-controlled Congress — will use to make sure that we do everything we can to make this economy strong,” said Rep. Jason Smith (R-Mo.) , the ranking member of the House Budget Committee. He’s seeking the top GOP spot on the tax-writing Ways and Means Committee but said if he doesn’t get it, he’ll remain in his Budget Committee position.

A budget plan introduced in June by the Republican Study Committee proposes a gradual rise in the Medicare age of eligibility to 67, and 70 before Social Security eligibility. This proposal persists despite the evidence that the average life span of American citizens has been steadily dropping over the past two years.

Withholding payments to those who retire early — and exceed an earnings threshold — and redirecting payroll taxes used to fund the social safety net to private entities are just a few items being discussed among House Republicans. Proposals that Speaker Nancy Pelosi (D-CA) says “constitute privatizing Social Security and ‘ending Medicare as we know it,’” Bloomberg wrote.

“House Republicans are openly threatening to cause an economic catastrophe in order to realize their obsession with slashing Medicare and Social Security,” Henry Connelly, a Pelosi spokesman, said in a Tuesday statement to Bloomberg Government. “As House Republican leaders’ own words constantly reveal, dismantling the pillars of American seniors’ financial security is not a fringe view in the extreme MAGA House GOP, it is a broadly held obsession at the core of their legislative agenda.”

In public, the GOP has claimed it wants to “preserve” the nation’s two largest mandated expenditures, but their rhetoric and actions behind the scenes tell another story.

It’s been over a decade since the last showdown over the debt ceiling during then-President Barak Obama’s first term – ending with a deal, thanks to then-Vice President Joe Biden’s relationships in the Senate. While President Obama and then-Speaker John Boehner (R-OH) got the credit, it was really McConnell and Biden who got it done.

“It was Biden’s close working relationship with McConnell that broke the months-long logjam. McConnell and Biden have a long history, serving together for a full 25 years of Biden’s 36-year-tenure as the Democratic senator from Delaware. The two men were at the center of a major tax cut deal in December.”

“Biden’s the only guy with real negotiating authority, and [McConnell] knows that his word is good,” said a senior GOP staffer close to the talks. “He was a key to the deal.”

Today’s hyper-partisan Congress makes a compromise less likely. Gone are the days when working across the legislative aisle in the best interest of the American people was the standard operating procedure. The Republicans, if regaining control of either chamber, will not back down. They have laid out their plans, and the American people need to listen.

Mainstream media has overlooked the significance of Medicare and Social Security being on the chopping block, but we can show the GOP that we got the message loud at clear at the ballot box on November 8th.

The post NEW LOW: Republicans claw past the bottom in push to gut Social Security and Medicare appeared first on Occupy Democrats.