Pelosi kills Medicare For All bill for lack of votes 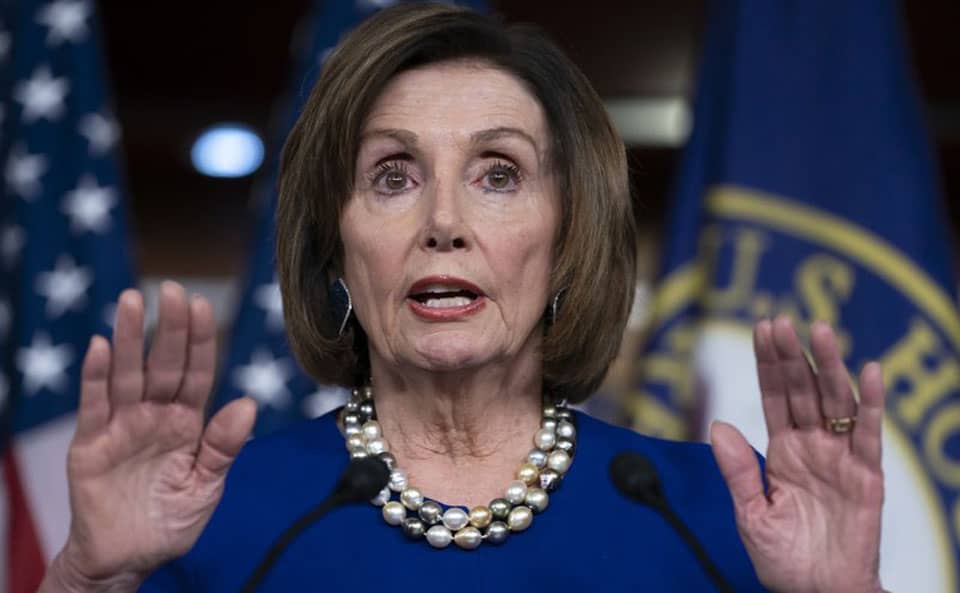 Speaker of the House, Nancy Pelosi, explained that she doesn’t have the votes in the House to pass Medicare for All.
| J. Scott Applewhite/AP

WASHINGTON—House Speaker Nancy Pelosi, D-Calif., has killed the Medicare For All bill, and did so even before rallies in 56 cities nationwide in late July pushing the cause.

In a one-on-one interview via Zoom, Pelosi told noted national Medicare For All campaigner, Ady Barkan, she wouldn’t bring the measure, HR1384, to the House floor because it would definitely lose, and she didn’t want to put vulnerable Democrats on the spot by forcing them to vote on the legislation.

“I don’t want my members to walk a plank on a vote that we ain’t gonna win,” Pelosi declared.

Besides, she said, the best route to widened health care coverage is to improve current Medicare by lowering the age of eligibility to 60, covering dental, hearing, and vision treatment, empowering Medicare to bargain down prescription drug prices in talks with Big Pharma and institute other reforms.

Barkan posted the interview on YouTube but didn’t overly publicize it. A pro-Medicare For All group, Progress America, did, as part of a fundraising pitch for its Be A Hero campaign for progressive causes.

Pelosi was quite upfront in her talk with Barkan when he pressed her repeatedly about calling up the legislation, which he said has 156 House sponsors. All are  Democrats, and they’re a large majority of the party caucus. He began by reminding Pelosi that she endorsed it publicly in testimony in 1993, and showed the video clip.

“My comments then preceded the” enactment of “the Affordable Care Act,” she replied. ACA “has better benefits than Medicare” and “expanding those benefits is very much a priority for us…The path to health care for all runs through the ACA.”

As for Medicare For All, “We didn’t get it” in the last Congress, when the Democratic majority was larger, Pelosi elaborated. “And we don’t have the votes to get it now.”

Pelosi conveniently omitted one fact: In the last Congress, progressive pressure forced her to tell panel chairs to hold hearings on Medicare For All. She then also quietly ordered the key chair, Rep. Richard Neal, D-Mass., of the Ways and Means Committee, to bury it. He did.

“I know 156 sounds like a good start, but it’s not 218,” the number needed to pass the 435-member U.S. House, Pelosi continued. She also did not mention that in many cases, lawmakers campaign for an issue and even sign on to it, just for show, knowing it won’t pass.

“I cannot put my members on the spot where it is not helpful in their districts to do this if it’s not what they actually believe,” Pelosi said since Democrats have only a 220-212 majority.

“They believe the Affordable Care Act is the path to go. And I’m not going to bring a bill to the floor that has 156 votes. I’m just not going to do that…I always want to show how strong we are, rather than how lacking we are.”

Medicare For All, pushed in the Senate by Bernie Sanders, Ind-Vt., has been a top cause for years of a group of unions, led by California-based National Nurses United. But even NNU, along with 16 other unions, endorsed the Medicare expansion ideas, in a letter to lawmakers last month.

Advocates, led by NNU, declare Medicare For All would eliminate the rapacious health insurers, their high co-pays and deductibles, and denial of care—denial that reputable medical journals calculate costs 44,000 deaths every year.

It’s also been a top cause of the Congressional Progressive Caucus, whose members have been getting upset with both Pelosi and Democratic President Joe Biden for several reasons, including inaction on extending the coronavirus-caused federal nationwide rent moratorium. They also think Biden is abandoning progressive goals he advocated during the 2020 campaign, after working them out with Sanders and his allies.

Progressive frustration boiled over in a weekend telephone Zoom conference, the Washington Post reported, as angry lawmakers cursed at being taken for granted. Their chair, Rep. Pramilla Jayapal, D-Wash., also warned Pelosi and Biden not to count on their votes all the time in the future.

And though the Progressive Caucus is the House’s largest, at around 100 members, Biden has yet to meet with it as a group.

At the same time, Jayapal and dozens of other lawmakers signed their own letter to leaders last month endorsing the expansion of current Medicare along the lines Pelosi and Biden favor, and not mentioning Medicare For All.

That leaves outside groups, such as Progress America—which posted a pro-Medicare For All petition on its website—National Nurses United and Physicians for a National Health Program to push the cause and push Pelosi to a House floor vote.

“Be A Hero will never stop fighting to make Medicare for All a reality–even when that means having tough, uncomfortable conversations with America’s most powerful elected leaders,” Progress America said of its campaign. “Let’s show Speaker Pelosi just how powerful our movement for Medicare for All is.”

Mark Gruenberg is head of the Washington, D.C., bureau of People’s World. He is also the editor of Press Associates Inc. (PAI), a union news service in Washington, D.C. that he has headed since 1999. Previously, he worked as Washington correspondent for the Ottaway News Service, as Port Jervis bureau chief for the Middletown, NY Times Herald Record, and as a researcher and writer for Congressional Quarterly. Mark obtained his BA in public policy from the University of Chicago and worked as the University of Chicago correspondent for the Chicago Daily News.